Celebrating synth pioneers from the Port 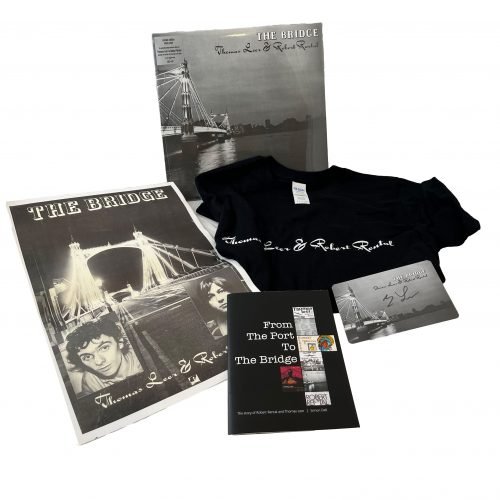 With Robert unfortunately passing away in 2000, this record, Leer and Rental’s one and only album together, stands alone in capturing the duo’s pioneering capabilities. ‘The Bridge’ was originally released on Throbbing Gristle’s Industrial Records label in 1979 and is considered to be an early electronic avant-garde synth-pop masterpiece, seeing the likes of John Foxx, Propaganda, Art of Noise and ABC citing the pair as key influences. The release of this album aligns the exhibition ‘From The Port To The Bridge’ which will be held at The Horse Hospital in central London from 21st January until 10th February 2022. The exhibition, which was previously shown in Greenock in 2018, shares the story behind Thomas Leer and Robert Rental and the making of the album.

Included in this bundle, along with a faithful reproduction of The Bridge on limited white vinyl via Mute is :
– From The Port To The Bridge zine written and edited by curator Simon Dell
– Thomas Leer & Robert Rental T Shirt available in several sizes
– The Bridge Postcard signed by Thomas Leer
– Reproduction Industrial Records album promo poster