Molly Nilsson is a lifer. And, dear readers, let’s face it, so are we all, right? Molly Nilsson’s new album Extreme is Monorail’s album of the month for June and if you know us you know we’ve been fans since the beginning and to see her craft explode into this new era is pretty edifying. She’s a lifer though –  this is her tenth album after all – and has found her calling in life: to write these songs mapping the heart and world and to tour them, presenting them to open ears and hearts around the globe. I know because I have also come to the conclusion, a mere 25 years into this music game, that I am also a lifer.

You’re also probably reading this because you’re a fellow lifer: some part of your existence is dedicated to that feeling of connection with your favourite song, some frequency that tickles the right spot in your brain, the undeniable thrill when the right air fused with music is pushed out the speakers into world and gets you moving. For my sins, I’ve just come back to work after 5 weeks on tour with Molly Nilsson. It’s something no one really thought would be possible again after the last two years and while it’s felt weird being away from Monorail Music so long it’s also been deeply rewarding, a reminder as to why I do all this in the first place.

Extreme is, as I say, Molly’s 10th full length album since her career began in 2008. She’s made a career for herself with no industry support (apart from co-releasing the records on my own label, Night School), writing these songs and standing alone on stage with a USB stick, singing them simply and directly to the audience. Of all the artists and bands in the world she is the artist I’ve seen most and I can honestly say each night is new, special and unique. Not a natural extrovert, her songs deal with desire, politics, feminism, loss, romance and she delivers them winningly awkwardly but confidently. Hers is a natural charisma that other introverts instantly relate to and I know because I’ve seen it every night for the last 5 weeks.

On our date in London, 4 separate people came up to the merch stall and showed us their Molly Nilsson tattoos. People queued before doors to be first down the front, numerous fans would bring flowers or hand-painted portraits of her to the shows. We played – and sold ou – the same venues as people like Thee Oh Sees, Sisters Of Mercy, big popular bands who, while great, enjoy a level of industry support Nilsson has never sought and at times has actively rejected. The music might be different, but this was punk in praxis. Honestly, no splitter vans for us: my Monorail sabbatical involved loading my 2014 Ford Focus up with boxes of records and T-Shirts and driving from show to show, city to city, with a sliver of space out the rear window to watch the motorway’s traffic. We drove 10,000 miles (significantly more than the Proclaimers, though we of course had a mode of transport) to play these songs to people so it’s pretty obvious that this album, her biggest in scale while still maintaining her distinctly home-recorded charm, should be Monorail’s Album Of The Month.

And what a record. Extreme opens with an outlier in Nilsson’s arsenal… a big power chord and metal drumming anthem to power, the internal power within versus the hegemony we all struggle under. Earth Girls imagines Bruce Springsteen in female form, singing about female oppression in the modern world… I have to admit it took me several gigs to get the real meaning of “Women have no place in this world.” In a nice update to Ivor Cutler’s classic, women have no place in this world because it’s not good enough for them, not the other way round. Sweet Smell Of Success again uses grandeur, a slower pace and chorus vocals in a bold, bittersweet anthem about hometowns, running away, coming back, growing. Each night the first half of the set would end with album closer Pompeii which grew in emotional heft every night. An ode to that perfect moment in a relationship before it breaks down, it’s the desire to freeze that perfect moment where everything was right (even if it wasn’t at the time), mourning the loss of something brief and great. There’s a line in the song “I’d say I love you but I catch my breath because whatever I love I always love to death..” that brought a tear to the eye every damn night. It’s something Leonard Cohen would be pretty damn proud to write, right? 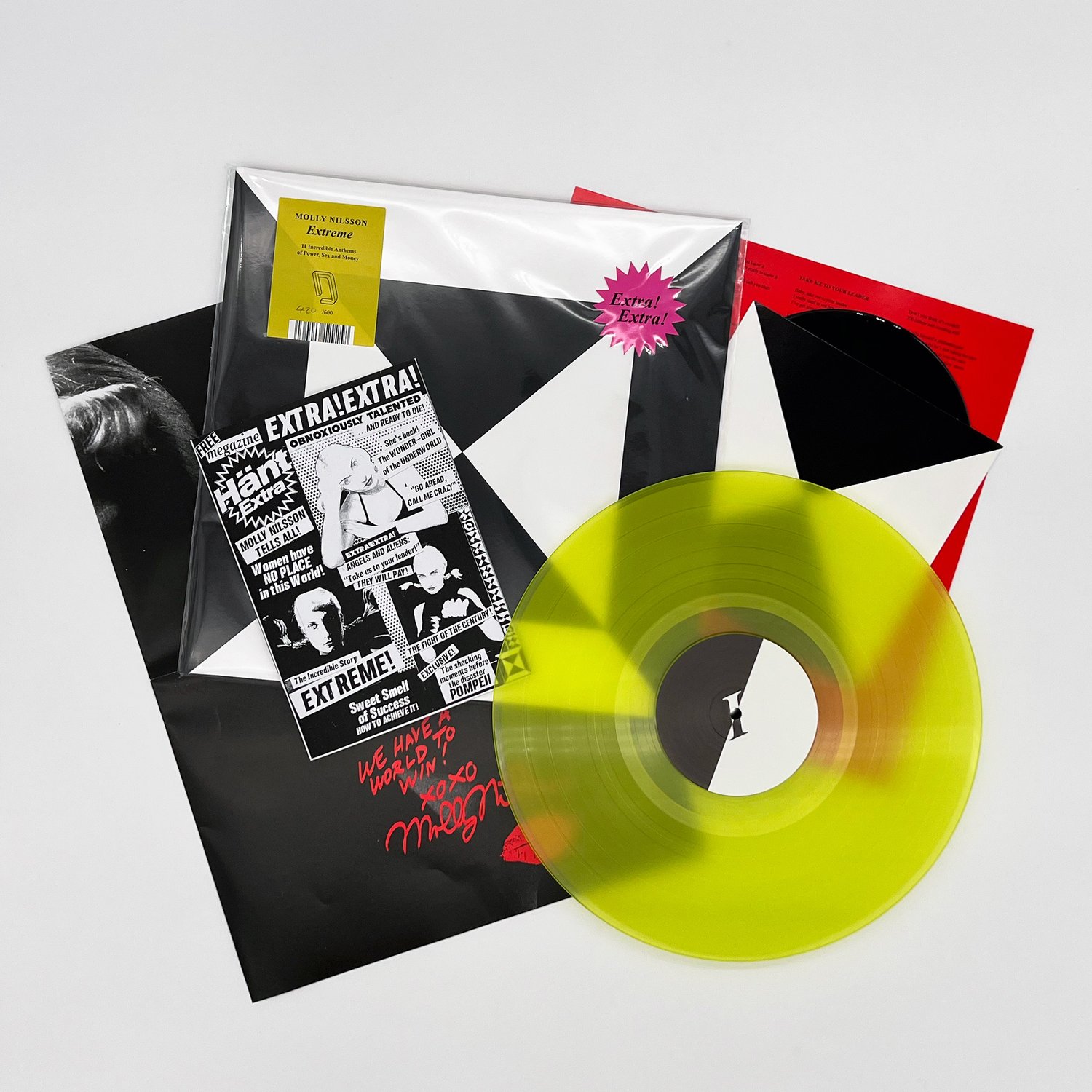 Molly Nilsson’s Extreme is available as a Dinked edition with bonus fanzine, 7” and poster and CD. Other formats are available but these are the two that matter at the moment, capiche? I really wish I was discovering this amazing artist’s catalogue for the first time, I’m jealous of anyone who is.

Anyway, how are you all? I’ve missed the hustle and bustle of the shop and am itching to get back in the saddle (for saddle read office chair with no back that also doesn’t seem to rise or lower anymore? My next job is to contact HR.) So consider this email my return to the comms. I slipped in a mere 10 mins late today so back to normal we go.